Toni Morrison, one of the best and most influential literary writers of the 20th and 21st centuries, died on Monday. She was the first Black woman to win the Nobel Prize in literature and the author of eleven novels, dozens of essays, as well as literary criticism. When Morrison’s publisher announced the news of her death on Tuesday morning, thousands of people began mourning her incredible life on Twitter. Within a little over a day, more than 500,000 Twitter users in fact cited Toni Morrison specifically by first and last name in a million tweets and retweets.

To preserve this powerful commemoration of a historic American author, I started collecting tweets that mentioned “Toni Morrison” with twarc, a digital tool created by Ed Summers and DocNow. At the end of this blog post, I explain how you can access the tweets from this archive—only if the tweets are still public and have not been deleted by their creator—and I outline some ethical considerations and best practices if you plan to use this data.

But first I wanted to share a quick overview of the roughly one million tweets and retweets that paid tribute to Toni Morrison’s life in the day after the news broke.

You can also see a bar chart version of the top Toni Morrison quotations.

Many of the Twitter users featured in this archive shouted out their first-read, favorite, or most memorable Toni Morrison novel by name. To see which novels were mentioned the most, I identified tweets that included Morrison’s fiction titles in a capitalized or all-caps form (generally indicating the proper noun usage of the word or words). 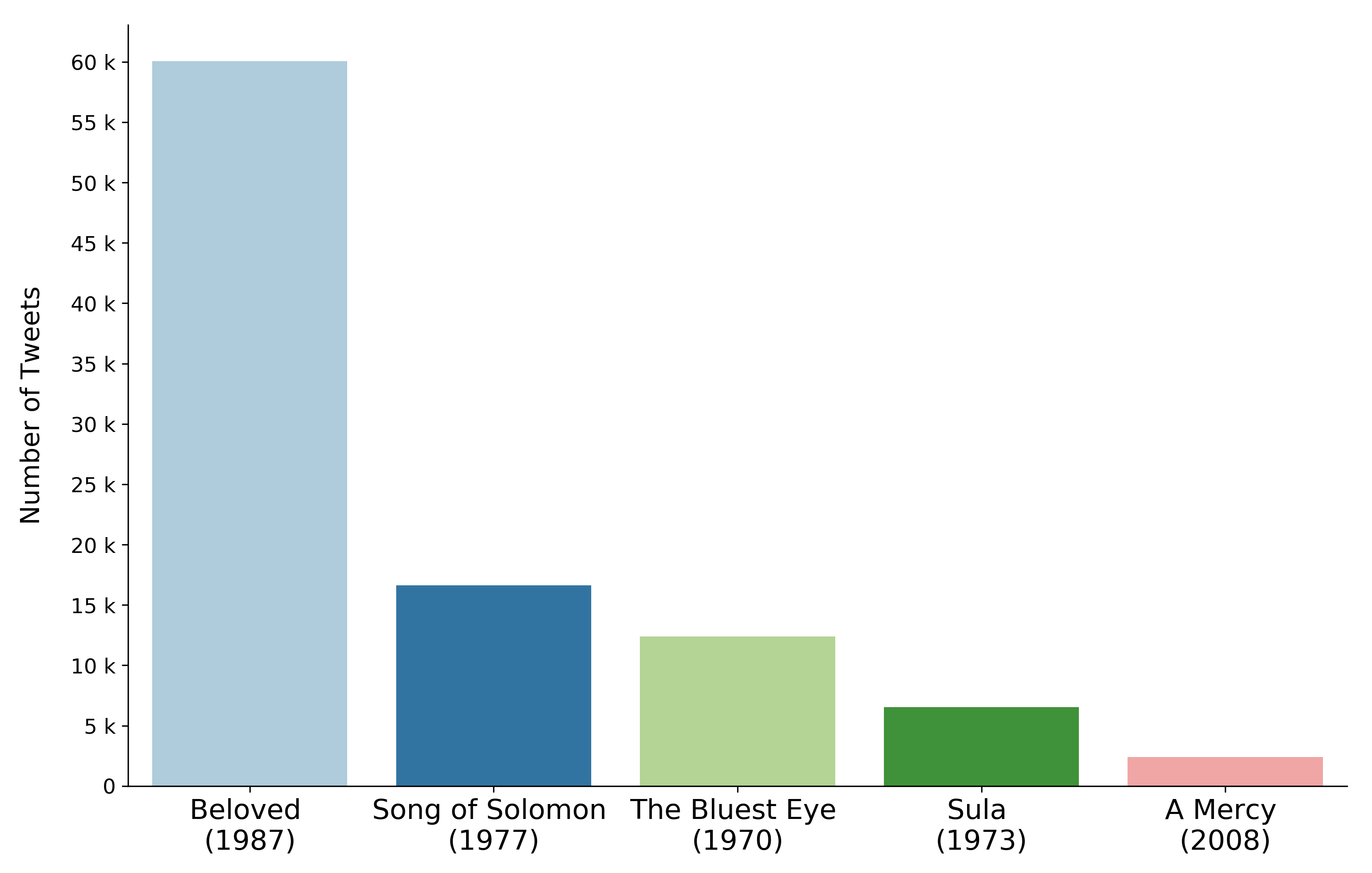 The top five Morrison novels mentioned on Twitter after her death appeared to be Beloved (1987), Song of Solomon (1977), The Bluest Eye (1970), Sula (1973), and A Mercy (2008). All eleven of Morrison’s novels were mentioned within these roughly million tweets, however, and you can also explore a bar chart that compares mentions of all her novels.

Top Tweets From Most Followed Accounts

Toni Morrison was a truly colossal public figure. So I was also interested in seeing which other highly influential public figures were discussing her after her death. The Twitter accounts with the most followers that also tweeted about Morrison between August 6-7 were Barack Obama, Hillary Clinton, Oprah, The New Yorker, Bernie Sanders, NPR, Common, Kerry Washington, and Bill Clinton.

Twitter’s terms of service do not allow tweet datasets to be shared openly on the web, but they do allow for the sharing of unique identifiers, which are tethered to every tweet and which can be used to access an original tweet if that tweet is still public and has not been deleted yet. This policy, as DocNow puts it, “speaks to users rights as content creators, while also allowing researchers to share their data with others.” Accordingly, I have shared a data set of 1,170,032 unique identifiers for tweets that mentioned “Toni Morrison” with or without a space between August 6 and August 9, 2019 on the Internet Archive. It will also be available through DocNow’s Tweet ID Catalogue.

If you want to access and analyze this data yourself, you can do so with twarc or the desktop application, Hydrator (and the “hydration” process is explained in greater detail in both places). If you choose to use this data, I highly recommend consulting DocNow’s white paper about archiving social media content, especially their concluding recommendations:

The loss of Toni Morrison is a profound one. Like so many others, I am drawn to Obama’s widely recirculated words to put this loss into perspective. It really does feel like a “gift” to have “breathe[d] the same air” as the great Toni Morrison, “if only for a while.” It’s hard to imagine that a more major literary figure will be alive again during my lifetime.

But it is also profound to have witnessed so many people testifying to Morrison’s literary influence and legacy this week, to have seen such sincere interest in her life and work, and to have observed the author reconstituted by those mourning and celebrating her on Twitter. These Twitter users collectively grieved Morrison—the author of deep, difficult, and complex narratives—in the necessarily reductive form of 240-character tweets, photos, and video clips, and they often did so with creativity, beauty, and power.

Many of these Twitter users also spoke about returning to Morrison’s difficult novels (or essays or literary criticism) or about wanting to dive into them for the first time. There have been many “essential” Toni Morrison reading lists published in the last few days, but I wanted to conclude by offering a short round-up of further scholarly reading on Morrison to also direct people to the work of scholars who have been studying and attending to Toni Morrison’s life and literature for many years now.