I saw her lift her honeyed muzzle
into the leaves, and her thick arms,
as though she would fly -
an enormous bee
all sweetness and wings -
-Mary Oliver, “Happiness”

Last month on my birthday, my boyfriend’s mom sent me a handwritten Mary Oliver poem in the mail. The poem, called “Happiness,” is about a she-bear getting a little bit drunk on honey. It was a lovely gift in every way.

I’m obsessed with how people share literature with one another, whether it’s through handwritten notes, or well-worn library books, or tweets. So when Mary Oliver died on Thursday, I was sad but also blown away by how many people were mourning her life by sharing her words on social media.

When I checked Twitter, I found an outpouring of Oliver’s poetry. Friends, colleagues, celebrities, and strangers were tweeting favorite quotations, pictures of dog-eared pages, and videos of themselves reciting her words. This free-flowing, social circulation seemed like a fitting tribute to a poet whose work has for so long been dedicated to and beloved by a wide public.

“When it's over, I want to say all my life I was a bride married to amazement.” Mary Oliver
I’ve been soothed, comforted, informed, enhanced by your words. Your life has been a Blessing to the world. #maryoliver

I decided to start archiving tweets that mentioned Mary Oliver’s name early Thursday afternoon. To do so, I used DocNow’s awesome archiving tool, twarc. Within the last few days, over 100,000 tweets and retweets from 78,000+ users in 38 different languages have acknowledged Mary Oliver. Here’s a breakdown of the archive so far:

I’ve shared the tweet ids for this Mary Oliver archive on my GitHub page, so if you’d like to analyze the data yourself, you just have to “rehydrate” the ids. You can do so with twarc or with the desktop application, Hydrator (and the 💦💦💦 process is explained on both of those pages). I plan to keep the livestream capture going for the next couple weeks, and I will update the archive accordingly.

But for now I wanted to share an overview of these 100,000+ Mary Oliver tweets, including the most retweeted tweets, the most common phrases used, the top images, and the biggest celebrity shout-outs:

These top tweets all quote Oliver’s poetry or words in some way. They cite the poems “Wild Geese”, “The Summer Day”, “The Uses of Sorrow”, “Praying”, and “Snowy Night”, as well as two famous quips about poetry itself: that it “isn’t a profession” and that it “mustn’t be fancy.” I used key phrases from these 10 quotations—e.g., “one wild and precious life,” “box full of darkness,” “wild geese”—to see how often these same poems/words were cited:

The above chart does not represent all citations of Oliver’s words, just the specific phrases/poems that I searched for. Most other tweets in the corpus (95,598 tweets) were not included or identified here.

I also searched for the most common recurring phrases, which again resurfaced quotations from “The Summer Day,” “Wild Geese,” and “The Uses of Sorrow.” But this search also turned up other widely-cited quotations, such as “To live in this world/you must be able/to do three things” from “In Blackwater Woods”.

To live in this world

you must be able
to do three things:
to love what is mortal;
to hold it

against your bones knowing
your own life depends on it;
and, when the time comes to let it go,
to let it go.

Pay attention.
Be astonished.
Tell about it.

To look for Oliver’s poetry only within the text of tweets misses one of the major ways that her words were shared: images and videos. The following shows the top images from Mary Oliver tweets, all pictures of text except for one snap of the actor Misha Collins, who is an apparent Oliver disciple and otherwise most famous for his role on the television show Supernatural.

Speaking of actors who adore Mary Oliver, the following shows the individuals with the most Twitter followers who mentioned her name in the last few days (in order of most to least followers):

This post only scratches the surface of how folks mourned Mary Oliver on Twitter in the wake of her death. But it’s been my small way of fulfilling Oliver’s edict: to pay attention, to be astonished, to tell about it.

I’m telling you that I’m astonished to see tens of thousands of Twitter users sharing poetry with each other in the span of two days. Here’s to sharing more poetry with one another—and, of course, to Mary Oliver. 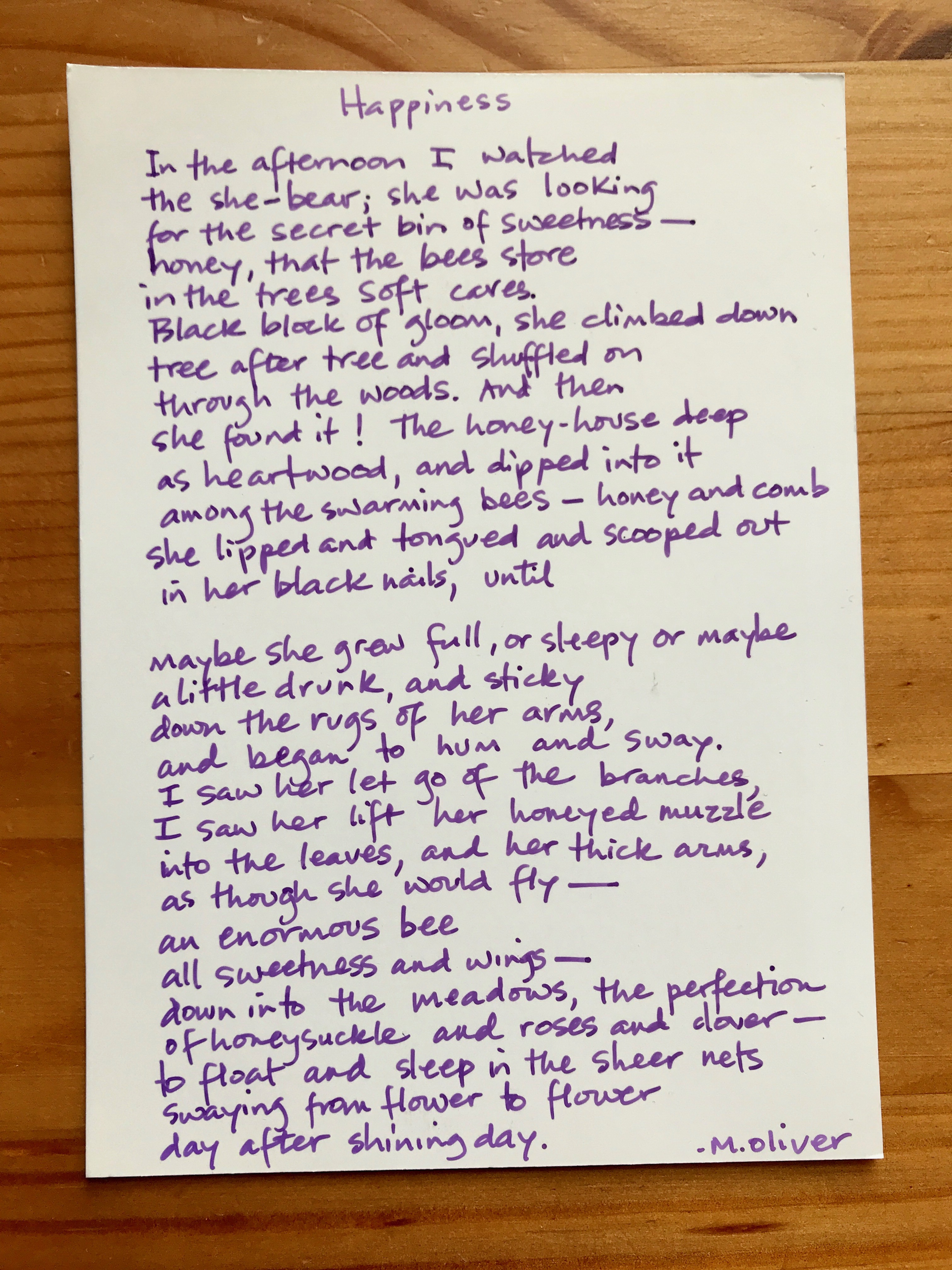